Recent News    /    Where Does a Super Scooper Pilot Come From?

Where Does a Super Scooper Pilot Come From? 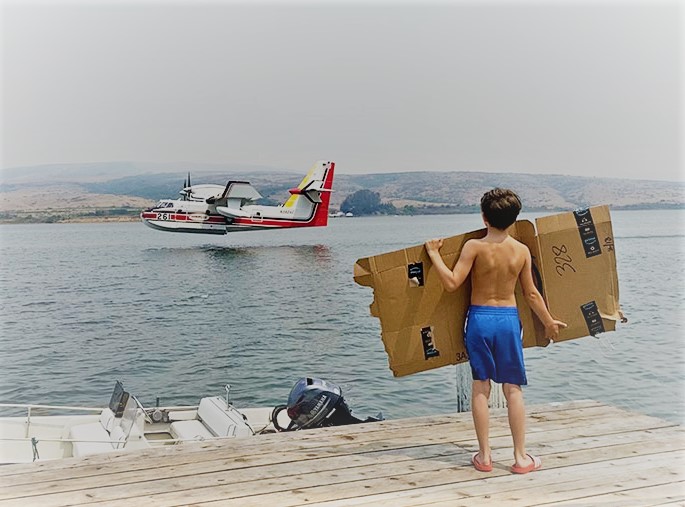 Just glance at the picture and you see a future scooper pilot, fascinated by the sight of one of our CL-415s hovering over Tomales Bay, seconds before it skims the surface to reload and mission out to a nearby wildfire near Point Reyes National Seashore. The photo was captured by Dakota when she and her two young sons plus a group of their friends watched from their dock.

Combine that captivation with the fear of a scorching fire that burns through a beloved nature preserve, forcing friends to evacuate homes and flooding the air with thick smoke, and emotions escalate, lifting the pilots who fly the water bombers into the status of super hero.

A passion ignites and while the path to becoming an Aerial Firefighter is a long one, it is fueled by a love that only grows over time.

Aero-Flite’s four Super Scooper aircraft are piloted by 16 seasoned professionals, with Scooper 261 and Scooper 262 flying missions near West Marin this past summer, dropping water on the Woodward Fire. All our pilots experts in their profession, however one stands out for his impressive 14 year career with Aero-Flite.

Jason Robinson joined Aero-Flite in 2006 after previously working seaplane operations in Alaska, the Caribbean and Indian Ocean. He piloted various amphibious aircraft as Captain and Training Pilot before joining Aero-Flite as Chief Pilot and Training Captain for our CL-415 program. In addition, Jason is a Simulator Instructor and FAA Designated Pilot Proficiency Examiner.

Over the course of his career Captain Robinson’s desire to protect people and the environment from the air has only grown. He is an exemplary leader,  equally passionate about his crew’s safety and wellbeing as he is about saving communities from wildfires. He is a hero not only to the children that watch from the dock, but to those who have benefited from his skill and those who have had the privilege of flying alongside him.